Holy Crap! The Promised Land is here ...and the Lost Tribes are here too

Mojo Watcher is so intriguing why there were so many sudden interests to find and to know the histories of the people and the places on this part of world for the past 10 years. With many new leads, the interests have been catching up fast with so many followers in the past 3 years.

The world is big enough and yet this part of world with small peninsula with thin neck connected to the Asia continent is of new particular interest.

The followers claimed the peninsula was the origin of civilization since Prophet Adam a.s. The peninsula and all its neighboring islands once sat on the massive Sunda Plateau before the 3rd great flood.

The followers claimed the peninsula after the great flood during Prophet Noah a.s. was the center point of mass migration of civilized people towards Pacific and other parts of east Asia. So those China-men, Japanese-men, Korean-men actually came from this part of the region. The migration theory came with many initial evidences from genome traits of the HUGO project. 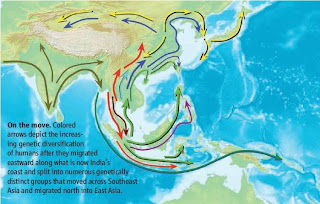 Now the Mormons want a piece of This Promised Land. Still debatable by them ... Now they say the Lost Tribes came here found this Promised Land and stayed for centuries. If the Book Mormons had any factual historical records to be considered then now it would make sense why the people in the modern day Land of Zarahemla and Land of Bountiful have very peculiar crude "Asabiyah" behavior. The "Asabiyah" traits came from  Middle-East.

Now it would make sense why people around this region easily accepted monotheism religion easily particularly Islam because they were the Lost Tribes and inter-marriage with the locals ....

Mojo Watcher is disturbed with so many interests in the Promised Land by many parties ... our sovereign and our security in the future are at stake.

If Peninsula is truly the Promised Land, then it makes sense why Mojo Watcher's gizmo picked up densely populated invisible beings unlike anywhere else in the world with exception of the Hijjaz and old Palestine regions. The Peninsula is truly the Promised Land since the beginning of time for both invisible and visible beings ...?

Mojo Watcher
Mojo Watcher has always been fascinated anything about light. Solid-state light enables Mojo Watcher to see and understand the vast realms of our Creator's finest creation since the beginning of time. Now technology has allowed us to see beyond the invisibility ... "What cannot be seen is there?" can be proven with science and technology. Human with great humility, intelligence and obedience to the Creator is no doubt the greatest creation of all living things ...